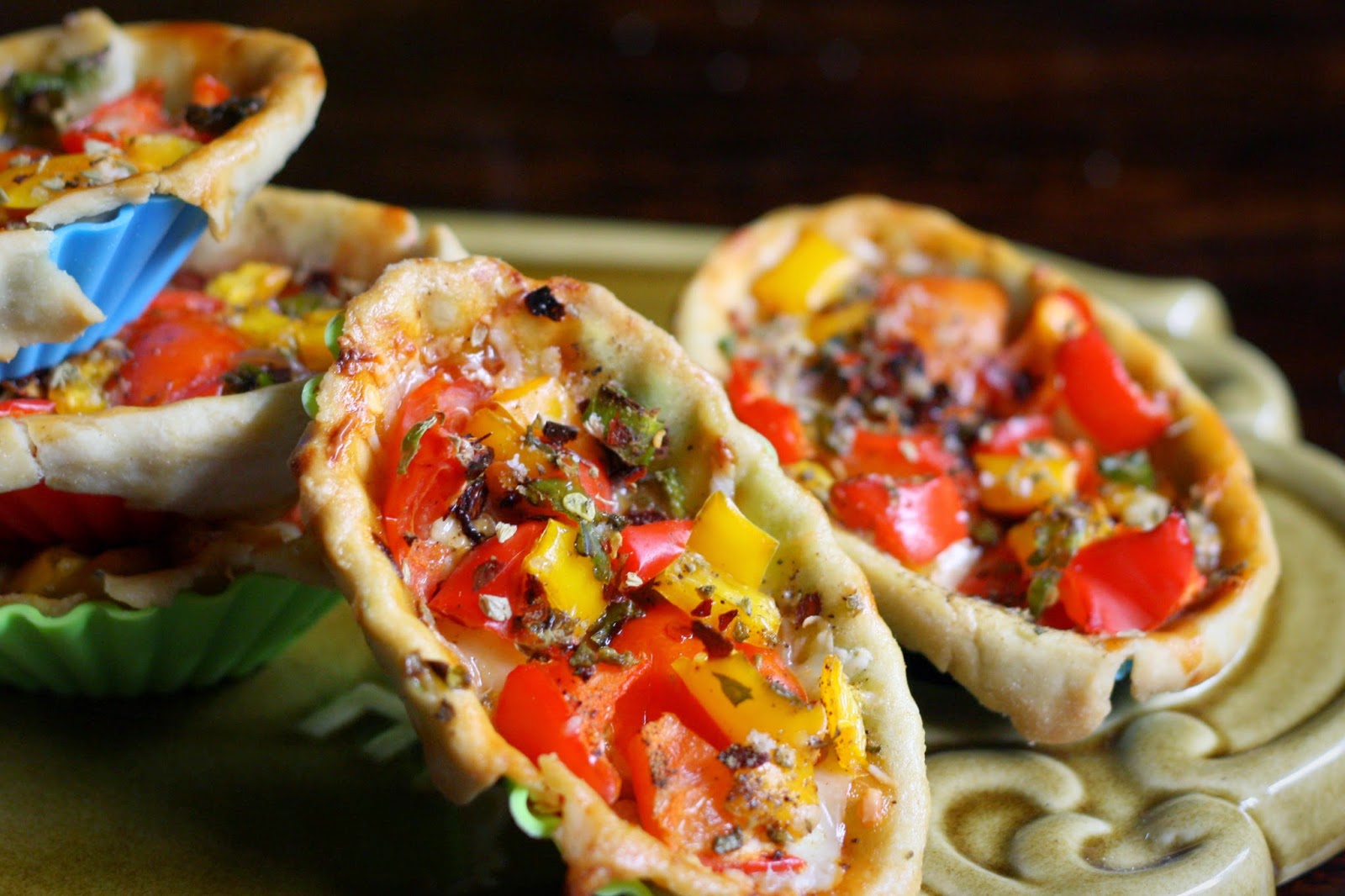 I had made these last Monday as a part of my meat free Monday series...Truth be told, I secretly look forward to meat free Mondays.. you want to know why a carnivore like me (sorry, but there is simply no point sugar coating it) would be secretly looking forward to meat free days???
Purely as a challenge to myself!! To my self control...and to my hone my culinary skills.. !
Well if you thought it wasn't easy being green, think how tough it must be to cook something green...
It literally gives me the creeps... I am not good at vegetable eating....If you have read my hassleback potatoes www.lapetitchef.blogspot.in/hassleback-potatoes post you will know precisely what I am talking about... But that doesn't mean I cant cook veg!!
Hey I just don't like your regular veggie fare...but I have more than my share of legumes, paneer and mushrooms on these days...
However, for this Monday, I decided to take the challenge up a notch and make something totally new to me... 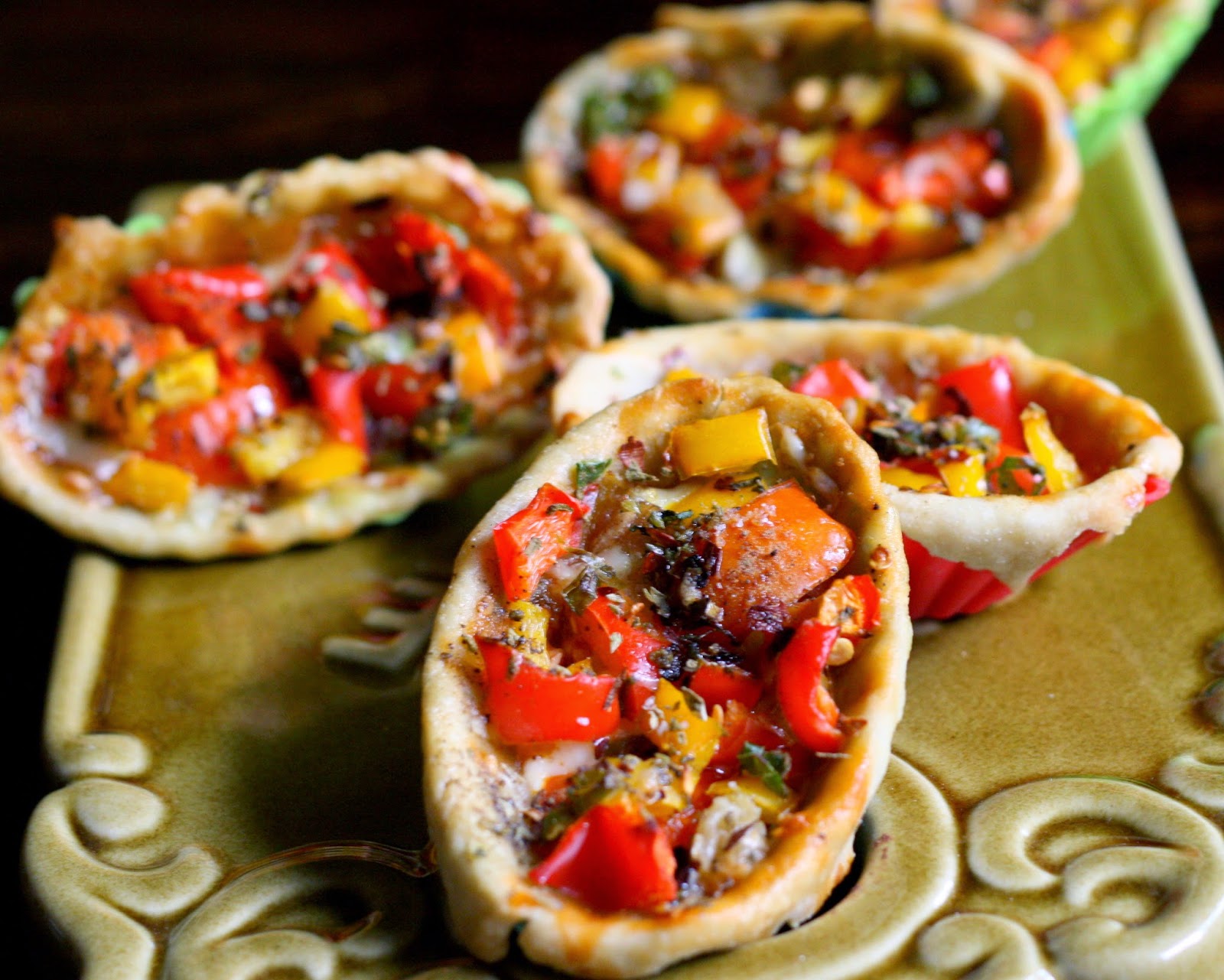 Well, I am not a tart virgin... I have eaten them loads of times..  I have adored quiches and tarts for as long as I remember...In fact, Leela Palace's Chai Bar used to know me as the quiche girl ;)
That being said, I had never made one before...
But I am so glad I did!!
Coz deliciousness comes in all forms...and it came as near about perfection in the form of this veggie delight tartlette..
I simply love individual sized portions these days...don't you ?? Be it tiny lil cake pops, to individually flavoured cupcakes with different toppings..starting from a mini dosa to single pan meals.. its all about small portions.. and keeping that in mind, I simply couldnt resist the thought of making these delicious flavourful tartlettes! 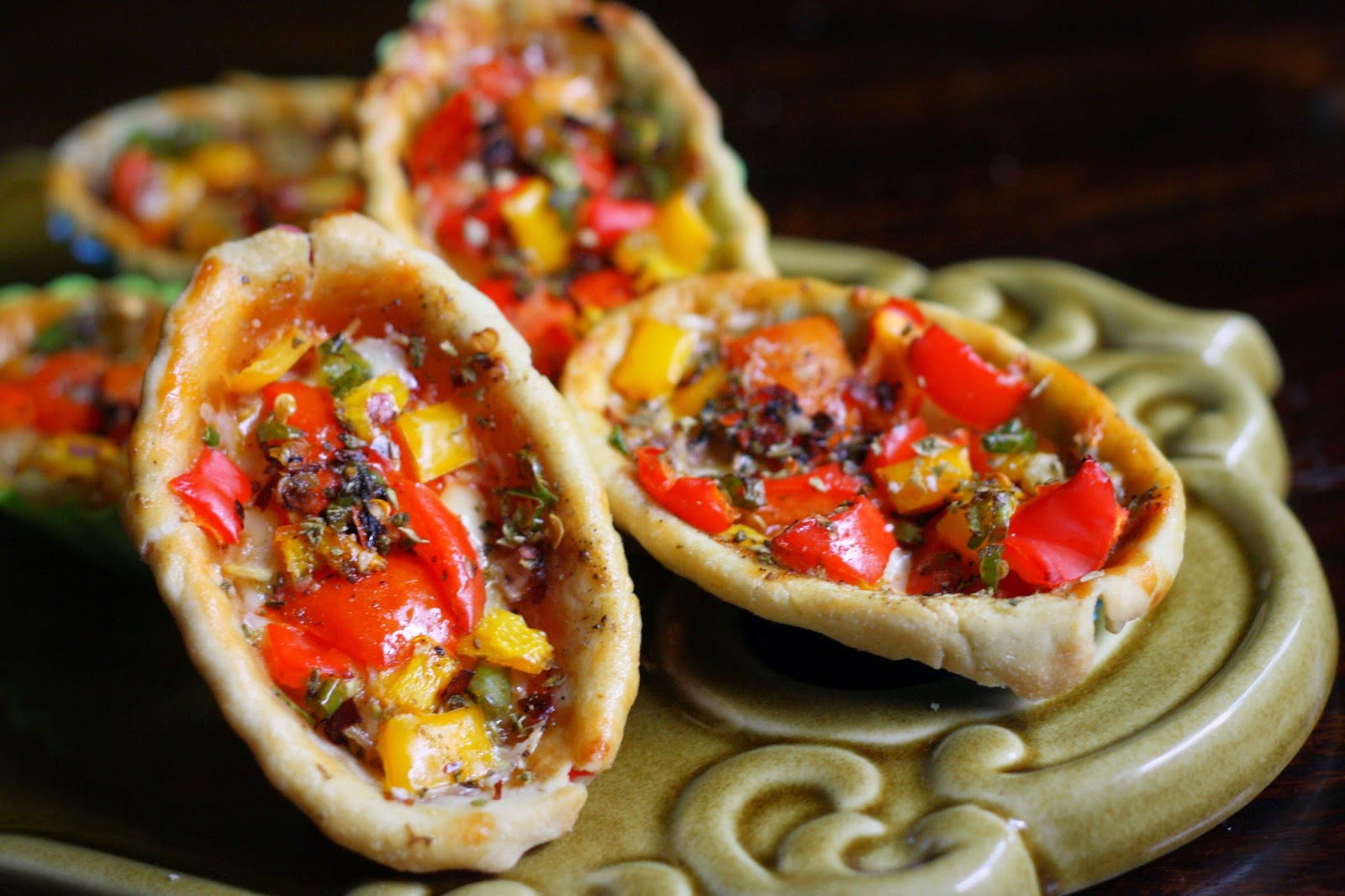 P ( my husband to u folks) was on leave for a couple of days...and we did our share of cooking and eating. And cooking. And eating. And eating. On Monday, we were trying to figure out how to use a bunch of  cherry tomatoes picked from my garden. They were lusciously ripe and begging to be featured in something special, and after we hemmed and hawed over pasta, frittata, and bruschetta possibilities…we wound up deciding to make a tart.
It would be one of the best decisions either of us has ever made.

Ahh…the bounty! You can not believe the flavor of these babies. Tomato deliciousness through and through.
And then we decided to take it up a notch further..and overdosed the deliciousness with the addition of Red and Yellow Bell Peppers!!

You do want the tart to sit for a few minutes before you serve it, so you have time to grab some basil leaves, cut them into a chiffonade…
And sprinkle it all over the tart.
Absolute glory. It just screams summer.( which in India means pretty much all the yr around)
Now remove from the tart tins..
And serve it up.

The verdict? This was one of the most delicious things I’ve ever eaten. The crust was cooked perfectly, the cheese was just the right amount, the caramelized onions sent the flavor through the roof, the tomatoes and peppers were roasted and glorious..and the spices and basil simply made it Perfect! P and I polished off almost half of it Monday evening, and by noon Tuesday, it was completely gone.
You’ll love this, my friends!

In a large bowl, with your fingers, gradually work the butter and oil into the flour for about 3 or 4 minutes until it resembles a coarse meal. In a small bowl, beat an egg with a fork and then pour it into the flour/shortening mixture. Add 3 tablespoons of cold water, 1/2 tablespoon of white vinegar and /2 teaspoon of salt. Stir together gently until all of the ingredients are incorporated.
Separate the dough into 6 balls. Separating it  will result in three thin crusts. If you prefer a more substantial crust, separate it in half.. Form 6 evenly sized balls of dough and place each dough into a large Ziploc bag. Using a rolling pin, slightly flatten each ball of dough (about ½ inch thick) to make rolling easier later. Seal the bags and place them in the freezer until you need them. (If you will be using it immediately it’s still a good idea to put in the freezer for about 15 to 20 minutes to chill.)
When you are ready to use the dough to make a crust, remove from the freezer and allow to thaw for 15 minutes. On a floured surface roll the dough, starting at the center and working your way out. (Sprinkle some flour over top of the dough if it’s a bit too moist.) If the dough is sticking to the countertop use a metal spatula and carefully scrape it up and flip it over and continue rolling until it’s about ½ inch larger in diameter than your pie pan.
With a spatula, lift the dough carefully from the surface of the counter into the tart pan/mould. Gently press the dough against the edges of the pan. Go around the tart pan pinching and tucking the dough to make a clean edge.
Make the filling.Proceed as mentioned below.

Heat a large skillet over medium-low heat. Add the butter, onions, salt, and pepper and cook for 20 to 25 minutes, stirring occasionally, until the onions are soft and deep golden brown. Set aside.
Preheat the oven to 180C.
Bring out the prepared tart moulds.
Sprinkle on the cheeses in a single layer, then lay on the caramelized onions, then sprinkle the tomatoes and bell pepper over the cheese.
Sprinkle the spices and drizzle a little olive oil on each tartlette.
Mix together the egg and milk in a small bowl and brush it all over the crust around the edge of the tart.
Bake the tart for 15 to 18 minutes, watching carefully to make sure the crust doesn't burn.
(The tomatoes should be starting to burst apart, with some dark/roasted areas on the skin, and the crust should be deep golden brown.) If the crust is getting brown too fast, reduce the heat.
Remove the tart from the oven and allow it to sit for 5 minutes.
Sprinkle the basil all over the top.
Remove from moulds and serve them!!

I think it looks fine, and I’m generally not concerned about my pies looking absolutely perfect. What I care about is how much the finished pie makes my "P" Man moan. Now that’s my measure of success.
Love,
S :) 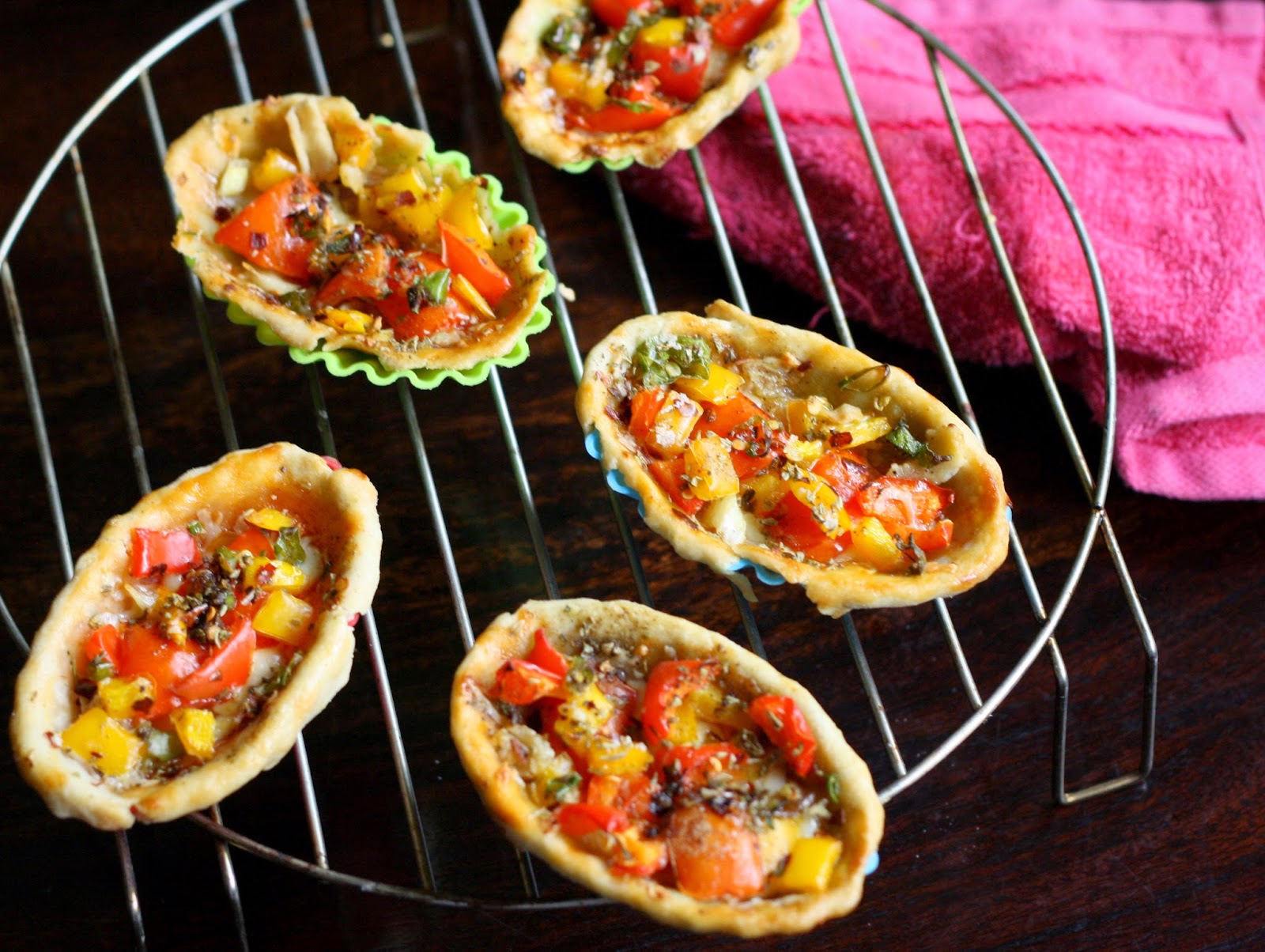 Notes :
I wanted to caramelize the onions so they’d add some nice, deep flavor to the tart.There is nothing better than sweet, caramelized onions in a pie..It takes its sweet time.So do not rush it.
I used what I had on hand, but so many different cheeses would work: you want a nice melted cheese combined with a cheese or two that are a little on the sharp side.
Basically, you can use whatever pie crust recipe your heart tells you to use. Just make sure it’s a generous one.
Just remember: roll from the center, outward in one stroke. Don’t do the old  Play-Dough back-and-forth, back-and-forth maneuver. Pie crust dough doesn’t like it.

You can of course add a whole range of things to it..my favorites would be chicken, mushrooms and olives(was out of olives that day,if you can believe it! )